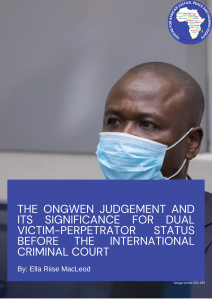 Dominic Ongwen’s trial before the International Criminal Court (ICC) has received major attention in the international arena due to the severity, complexity and scale of crimes committed in northern Uganda. The severity and scale of the crimes have been set out in the judgement of the Trial Chamber, which found him guilty of 61 counts of crimes against humanity and war crimes.[1] Dominic Ongwen’s case is complex because he is the first known person to be charged with the same war crimes he is also a victim of.[2] The purpose of this article is to address the significance of the duality of victim and perpetrator status before the ICC in the case of Dominic Ongwen.

At the age of 10, Dominic Ongwen was abducted by the Lord’s Resistance Army (LRA) in Uganda, trained to be a child soldier and forced to commit serious crimes such as killing, raping and mutilating civilians.[3] According to the field-notes of the Justice and Reconciliation Project, Ongwen was later promoted to the inner circles of the LRA and therefore in a commanding position of forces tasked with committing heinous crimes.[4] His ICC arrest warrant was issued in 2005, but the question still remained of how the Court would address individual criminal responsibility in the complex context of his case, which presented the duality of perpetrator and victim status. [5]

THE DUALITY OF CHILD SOLDIER AND VICTIM STATUS BEFORE THE ICC

In the trial of Dominic Ongwen, the accused pleaded ‘not guilty’ on the basis that he was abducted as a child, forced to be a child soldier and was therefore not a willing perpetrator but a victim of the LRA.[6] Art. 26 of the Rome Statute sets out that the ICC does not have jurisdiction over children under 18 at the time of the alleged commission of the crime.[7] Although the crimes he was found guilty for took place in his adulthood, it would seem relevant to address how his role as a victim could potentially serve as a mitigating factor, both for his individual criminal responsibility and for the sentencing. The court acknowledged in paragraphs 29 and 30 of the trial judgement that Dominic Ongwen was a child at the time of abduction by the LRA. However, the judgement itself does not contain an explicit statement on the dual status of Ongwen as a perpetrator and victim of international crimes. The judges noted that they rejected the arguments of the defence as ‘legally unspecified submissions’ on the basis that prior victimization could not itself constitute a justification for commission of international crimes.[8] The Prosecution noted in the sentencing that Ongwen’s role as a child soldier is relevant to the sentencing determination, but does not directly diminish his responsibility.[9] The defence argued that Ongwen would not have committed the crimes for which he has been convicted had it not been for his individual circumstances of being abducted at a developmental age.[10] In the opinion of Nini Els Pieters and Tonny Raymond Kiabara, the court’s failure to address the relevancy of the dual perpetrator and victim status is a surprising turn of events after the precedent set out in the Lubanga judgement[11] where the ICC Trial Chamber emphasised the devastating and long-term effects on child soldiers.[12] They therefore consider this judgement a missed opportunity for the Court to set clear standards in light of what International Centre for Transnational Justice refers to as ‘blurred lines and ambiguity between victim and perpetrator questions’[13].

The outcome of the judgement in relation to the status of men and boys as victims of sexual violence before the ICC is two-fold. Firstly, the victims’ defence attorneys highlighted that the chance for victims to lead evidence of sexual violence against men and boys was an opportunity to break the silence, and to recognise the full extent of sexual violence and the harms caused as a result’[14]. However, the Court rejected their argument and referred to the charges as gender-based crimes against women and girls in their decision.[15] Secondly, the lack of attention to Ongwen’s dual status as perpetrator and victim raises risks of diminishing the validity of his experiences as a child, as stated by the defence’s argument that these crimes would not have been carried out by Dominic Ongwen had it not been for his abductions and forced training to become a child soldier.

Although Ongwen’s status as a victim has not been evaluated sufficiently by the ICC, he has support from many family members and people in his hometown in Uganda. Ongwen’s cousin Joe Kakanyero, who was also abducted by the LRA and spent 5 years in the forces, stated that he blames the government for not protecting children and treating them as combatants from the age of abduction.[16] As the judgement itself did not contain an explicit statement on the dual status of Ongwen as a perpetrator and victim of international crimes, the question still remains: will child soldiers ever be sufficiently treated as victims in international criminal law if they also bear the status as a perpetrator of international crimes?

The outcome of the Ongwen judgement highlights the sound of the silence and stigma regarding sexual violence committed against men and boys. It also reiterates that as a child soldier, one will not be considered to have dual status as a victim and a perpetrator unless the commission of international crimes ceases after the age of 18. In order to break the silence for child soldiers as victims of international crimes and for men and boys as victims of sexual violence, the international community must turn to how such issues are addressed and evaluated in the ICC in future cases.

[15] Situation in Uganda in the case of The Prosecutor v. Dominic Ongwen (Decision on the Legal Representative Request for Reconsideration of the Decision on Witnesses to be Called by the Victims Representatives) ICC-02/04-01/15 para 9.