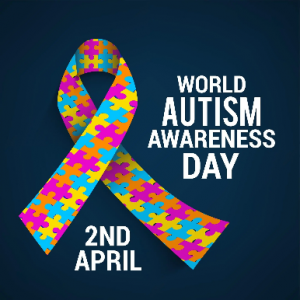 Throughout the United Nations history, the organisation has celebrated diversity and promoted the rights and well-being of persons with disabilities, including learning differences and developmental disabilities. In 2008, the United Nations adopted the Convention on the Rights of Persons with Disabilities, which reaffirmed the fundamental principle of universal human rights for all. The purpose of the Convention was to promote, protect and ensure full enjoyment for all persons with disabilities of their rights and fundamental freedoms equally.

World Autism Awareness Day is not only celebrated to promote respect and protection of the rights of people with autism, but all disabilities. The World Report on Disability proclaimed that there are between 93 and 150 million children with disabilities who are under the age of 14.

Autism is a developmental disability that affects social communication and behavioural development. Every child is affected differently and has their own unique challenges and needs. Early diagnosis is important so that children and their families can receive the support they need. However, for this to happen, there needs to be the necessary knowledge and resources to diagnose and care for the individual. Children with autism account for 6% of special education students and it has been rising over the past decade; which is why it is important to diagnose and treat. There is a problem in underdeveloped countries and communities where the lack of knowledge and resources leads to a higher stigmatization of children with disabilities, even beyond autism. This will usually mean that there is little to no appropriate care for the children affected.

Furthermore, it is often more costly for children with disabilities to go to school. Most schools can decide who goes there and who does not, so many times they reject children with disabilities. They then have to go to special schools. Many times, special schools cost money, while other schools do not. Moreover, transport to get to these schools also cost money because they are often further away. Sometimes this means children have to stay at the school. Also, children in special schools do not learn the same things as children in other schools or they do not receive a well-rounded education, which causes problems for them later on. The lack of appropriate budget also means that school buildings are often poorly built, which causes hazards, and that teachers do not have the training or skills to support the children.

It is important to improve this data and provide further education for people on what disabilities entail and how to ensure that all children can receive a proper education. It is not only important in order to promote their fundamental rights, but also because it is a smart investment in the community. There are a wide range of benefits to promote the inclusion of children with disabilities, including for the labour market. Studies show that there is a positive wage return on education for children with disabilities, and that excluding people with disabilities from the labor market costs countries between three to seven percent of their GDP.

Aside from the challenges in education children with disabilities in Africa suffer, there are a wider range of issues when it comes to discrimination in their community. Depending on the region and country of Africa, children with disabilities are seen as a gift or a punishment from God because of doing something evil during pregnancy. In many East African countries, epilepsy is seen as the child being possessed or part of some kind of divine intervention. There is a lack of awareness on mental disabilities, therefore many people do not believe psychological disorders are like every other illness. In a study done in Nigeria, it was found that 70% of people believe mental disabilities are caused by evil spirits and that they cannot be treated medically but have to be treated by pastors.

The stigmatization of persons with disabilities is growing; it leads to significant disadvantages in their life and can be very harmful. It is not only mental disabilities, or physical, but it is more about the fear of people with conditions they cannot explain or understand. The lack of education leads to a very dangerous stigma.

This is evidence in countries like Tanzania, where the high rates of albinism (1 in 2,000 Tanzanians) cause inherent fear and stigma from their communities. Due to the health challenges and physical impairments that come with the condition (lack of vision and high probability of skin cancer), this leads to them living a very controlled lifestyle. The lack of understanding as to why a child’s skin can be so pale even when born from two black parents leads to superstition and myths used to reason away the condition. Children born with albinism are considered to be “a curse from God” and in many places they do not even consider them human beings, or do not even want to touch them for fear of getting ‘infected’. Other myths associated with albinism are healing qualities of their body parts, which leads to them being hunted in some regions. The UN determined that an albino body could be sold for $75,000 and a limb for about $15,000, so the killings of people with albinism is a very common occurrence, and even family members provide people with access to the persons, so they live in grave danger.

The lack of education on physical and mental conditions are often a grave factor in the discrimination and stigma around disabilities. These persons are unable to access education, excluded from society and forced into extreme poverty; some are even killed. Thus, it is important to promote access to education and programmes of inclusion in those communities where ignorance of different conditions causes people such harm. For these reasons, the Centre for African Justice aims to promote education and awareness of the importance of inclusion and equality for everyone, no matter their condition. We want to remind people that to respect other people’s fundamental rights and freedoms is the most important value we can have.

Jimena Villot is a Project Assistant with the Right to Quality Education team at the Centre for African Justice, Peace  and Human Rights. She is currently an LL. B Candidate – International and European Law at the Haagse Hogeschool (The Hague University of Applied Sciences).

The price of exclusion: Disability and education in Africa (worldbank.org)

The Stigmatization of Disabilities in Africa and the Developmental Effects (sit.edu)

Albinism in Tanzania | Peacemakers for Albinism and Community (albinism-tz.org)