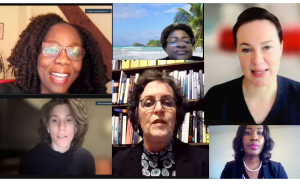 The Centre for African Justice, Peace & Human Rights held its 4th Annual Conference on ‘Sexual Violence against the Male Gender: A Perspective on Forced Displacement’ on 18th  December 2021. The event was held online via Zoom and featured the three speakers, Ms. Ines Keygnaert, Dr Marian Tankink, and Dr Noemi Magugliani, with expertise in different fields related to Conflict-Related Sexual Violence (CRSV), addressed in two sessions. We heard stories of endurance by male survivors of CRSV, we heard about the Impact of CRSV on refugee men and boys in Uganda and Greece, and we discussed the limitations to access justice for male survivors of sexual violence in domestic jurisdictions. 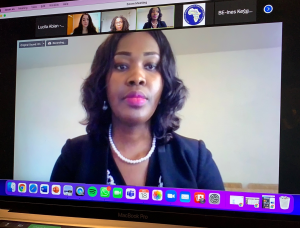 During her introductory speech, Ms. Ugwu first introduced the Foundation and the work of its different teams, with a focus on the Sexual Violence Team. Ms. Ugwu then went on to talk about the topic of the Conference and the reason behind such a choice. She reiterated the importance of bringing awareness to the perpetration of conflict-related sexual violence against men and boys through advocacy and research. Research conducted in the last few years has shown the prevalence of sexual violence among men and boys in displacement settings. In fact, sexual violence has been reported to be quite common among male refugees and asylum seekers, as it is often perpetrated during the migration journey as well as in the country of arrival. Finally, Ms. Ugwu reiterated the main goals of the Conference: raising awareness on such a pressing issue by creating a space where professionals from the field can come together to share ideas and best practices. 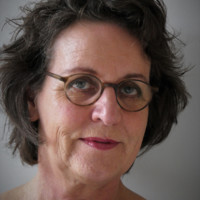 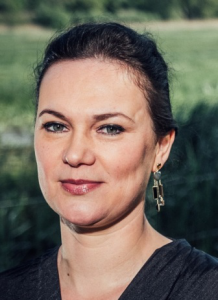 The first session of the Conference was themed ‘The Expert Perspective.’ The two speakers in the session were Dr. Ines Keygnaert and Dr. Marian Tankink. Dr. Keygnaert, Assistant Professor in Sexual and Reproductive Health, made a presentation on the subject’ Physical and Psychological Complexities of Conflict-Related Sexual Violence against the Male Gender in the Context of Forced Displacement’. Dr. Tankink, anthropological researcher and trainer on gender, violence, and mental health, delivered a presentation titled ‘The Psychological Consequences and the Impact on the Self-esteem and Identity of Refugee men and Boys who Experienced Sexual Violence: an insight on Greece.’ 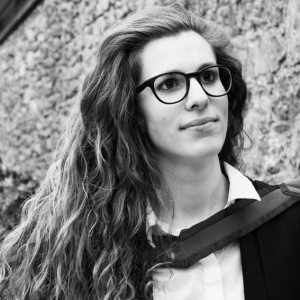 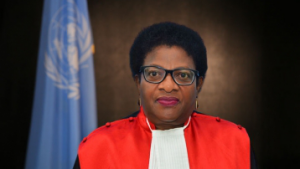 The second session of the Conference provided us with a legal perspective. The two speakers, Dr. Noemi Magugliani and Justice Nahamya presented their views on the topic. Dr. Noemi Magugliani is a Research Fellow in Anti-trafficking Law and Policy at BIICL and also works as a Legal Advisor to the United Nations Special Rapporteur on trafficking in Persons and a Legal Researcher with the Global Legal Action Network. She provided her contribution on ‘Limitations in Recognizing Sexual Violence against Men and Boys in a Domestic Asylum and Anti-Trafficking Context.’ Judge Nahamya is an experienced Ugandan Judge and the Executive Director of the NGO Emerging Solutions Africa, working on access to justice and fostering transparency. Furthermore, she currently serves as a Judge at the United Nations International Residual Mechanism for Criminal Tribunals, and she presented her contribution on ‘Limitations to Accessing Justice in Domestic Legal Systems for For Forcibly Displaced Male Survivors of Conflict-Related Sexual Violence.

During the interactive discussions, the speakers had the chance to further elaborate on some of the points made during their presentations and to further share their experiences. The Impact of COVID-19 on protection mechanisms and access to assistance for male migrant survivors of sexual violence was discussed, with Dr. Magugliani bringing the example of Italy and Dr. Keygnaert that of Belgium. Judge Nahamya further explained the difficulties male survivors face when accessing national and international courts due to stereotypes on the sexual victimization of men and the lack of relevant jurisprudence. Moreover, Dr. Tankink reiterated the importance of a multi-sectoral approach that provides victims not only psychological help but also self-development opportunities. The participants actively engaged with the speakers by asking questions as well as by sharing their thoughts and opinions.

The Conference provided a great variety of perspectives and experiences from professionals in the field, researchers, and legal experts. We are happy that together we were able to shed light on the issue of CRSV against the male gender, which is often underreported and undocumented due to stigmatization. The audience, the Chair, and the speakers were able to partake in fruitful discussions and share valuable perspectives that highlight the importance of addressing the issue of CRSV against men and boys in the context of forced displacement. By covering different perspectives, we were able to spark a lot of interesting discussions that we hope will continue to inspire you and others to help shed light on this issue and to make a change.

4th Annual Conference on Conflict-Related Sexual Violence against the Male Gender: A Perspective on Forced Displacement 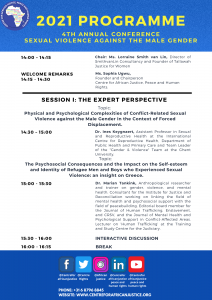 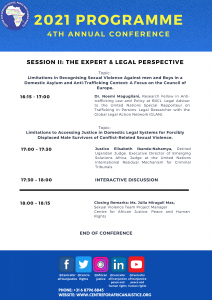 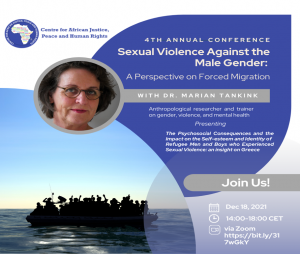 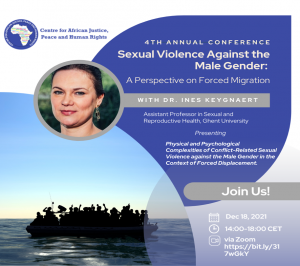 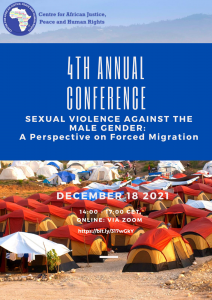