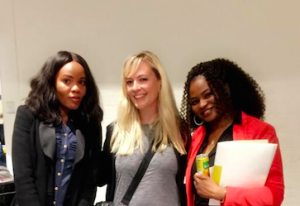 From left is Rachel, Nicolene & Cynthia at The Hague University of Applied Sciences, The Hague, Netherlands, on the 11th of October 2018.

Centre for African Justice, Peace and Human Rights gave a presentation at The Hague University of Applied Sciences on the 11th of October 2018 to raise awareness of Male Domestic Violence. The presentation was given at the Behind Closed Doors event organized by our partners, Gender Think & Do Tank.

The South African Domestic Act 116 of 1998 defines domestic violence as “physical abuse; sexual abuse; emotional, verbal and psychological abuse; intimidation; economic abuse; harassment; stalking; damage to property; entry into the complainant’s residence without consent, where the parties do not share the same residence; or any other controlling or abusive behavior toward a complainant where such conduct harms or may cause imminent harm to the safety, health or well-being of the complainant”.

Mashilo Mnisi is the head of the Moshate organization in South Africa. His organisation focuses on domestic violence against men and boys. He describes the abuse of men by women as “South Africa’s hidden crime”. Men and boys whom the organization deals with are denied fair access to public services as well as the right to fair treatment when they go to police stations, courts of law etc. Men who are affected by domestic violence cannot easily open a case of assault or abuse against women or even press for a protection order against a women. Mnisi, called on abused men to take a stand. “Do not suffer in silence,” he said.

The Moshate organisation finds that in many cases men are being denied access to their own children and face discrepancies in maintenance issues because women manipulate the system to change the outcome in their favor and there is no legislation to regulate such discrepancies. There are also instances of state health workers spreading stereotypes that a man cannot be raped by a woman.

The Moshate organization receives between 25 to 30 abuse complaints from men on a monthly basis and they struggle to deal with it due to limited resources.

It is important to know that male domestic violence is a very sensitive topic in Nigeria and should be dealt with carefully. This topic is hardly discussed or accepted in an African country such as Nigeria. For this reason domestic violence against the male gender has remained under-reported and unspoken.

In Nigeria, there has been a controversial statement on whether violence against men perpetrated by women has been on the rise or not and whether the table has completely turned endangering the lives of the male gender.

While most citizens agree that it has been on a tremendous rise, some still do not accept that with the notion that “Men are and will always be stronger than women”. Therefore, violence against men is sadly not a reality in Nigeria.

Be that as it may, the baton of battering has changed from men to women using the current violence cases in homes involving two Nigerian women whose disagreements led to extreme use of weapon that resulted in their husband’s death.

Having stated these cases, domestic violence involving women as the perpetrators, now seems on the rise.  However, the continued prevalence of violence in homes shows that this global and alarming topic is yet to be tackled with all the necessary political commitment, actions from NGO’s and even family interventions. Due to the fact there are none in Nigeria to support the male victims.

One Major factor to consider when we talk about domestic violence in Nigeria is “Patriarchy”.

We live in a patriarchal society where men are expected to be physically stronger than women and hold the power in their homes. Therefore, it is culturally regarded as shameful to know that a woman beats a man and that a man will hardly ever be bold to say, ‘my wife or my girlfriend is assaulting me’.

In the African setting, men are known to keep their feelings in whatever they are going through. Therefore, they hide the violence and are always strong and silent about it. A lot of men today are not free to express themselves or speak up when an issue is going on in their homes. Whereas women can shout it out and receive immediate help. These male victims often pretend that all is well when their wives are violating their rights at home. They may not even tell their closest friend what they are passing through in their marriages till the violence leads to death as in the case of Maryam Sanda whose husband (Bilyamin) received several death threats from his wife but he never spoke about until his wife finally murdered him.

THE IMPACTS OF ABUSE ON MALE GENDER

WHAT ARE THE SOLUTIONS TO MALE DOMESTIC VIOLENCE?

Therefore, cognizant of the fact that reporting male domestic violence challenges the deeply entrenched cultural perceptions of male invulnerability, male victims of domestic violence are reminded that continued non-reporting of these offences prevent them from receiving the much needed assistance and from accessing justice.

In conclusion, while some of the silence surrounding the issue of violence against women is continuously being broken, it is quite saddening that effective measures of justice are still not understood or applied in ways that can support or favor the male victims. Therefore, the risk that male victims will remain invisible and left out of responses to domestic violence is still very significant and remains so until more work is done to make their rights and concerns receive more special attention as it is for the female gender.