Imagine living in an area –given it being a village or a city–where defecating in the bushes is so prominent that governmental intervention is required to eradicate this practice. In Nigeria, this is not just a proposition but a fact of reality. Open defecation in Nigeria is a prominent problem, and in fact, falls just behind India–in second place–on the list of top practising nations of open defecation.1

In this article, we will be analyzing the issue of open defecation and the dangers it poses to children at schools. As children are the most vulnerable segments of any given society, they are more susceptible to diseases and life-threatening infections that hinder not only their educational growth but also their physical and mental development. With that in mind, we will analyze the issue in West Africa first in this article for various reasons, such as the large population of the region. In the context of West Africa, we will concentrate on Nigeria due to the crisis of open defecation in the country and the fact that Nigeria is one of the most important, populous countries in the region with considerable influence over other Western African countries. Nonetheless, if Nigeria improves its condition by providing more washroom facilities –especially in schools–,provide more accessible sanitized water and reduces open defecation in schools, it can set an example to other countries in the region. These improvements will positively influence talks about the importance of hygiene in other West African countries. As President Obama once said, “Nigeria Is critical to the rest of the continent, and if Nigeria does not get it right, Africa will not make more progress 2 ”.

Open defecation has been attributing to a health pandemic in parts of Africa. The causes of this practice are lack of access to toilet facilities, lack of water sanitation, or the lack of an adequate education around the importance of using toilets.

In Nigeria, our country of study, the combined result of the above issues, has led to an estimate of 47 million people –which equates to around 24.4% of the entire population of Nigeria– defecating outdoors regularly 3 . This problem is only expected to grow; by 2030 (according to a 2018 National Survey), a further 56 million people are also estimated to become accustomed to this noxious practice. The statistics around this problem do not end there, as a matter of fact, 116 million Nigerians (out of a 200million population) lack consistent access to toilet facilities 4 , and 50% of all schools in Nigeria do not have essential water supply and sanitation 5forcing them to practice open defecation. These limitations have forced the “Ministry of Water Resources” of Nigeria to pledge an initiative to end open defecation by 2025. The expected growth rate of the problem and the ongoing health complications of the problem are having a devastating impact on the communities in Nigeria. According to the Nigerian government, the lack of infrastructure has its most dire impact on the most vulnerable segment of the society, the children, threatening their health and jeopardizing their education in schools; as a result 6. This practice is so prominent that it has contributed to the country’s failure to meet its Millennium Development Goals (MDG) target 7. 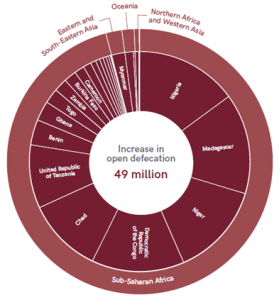 Figure 1: showing the change in the number of people practising open defecation, by country and region, 2000-2017 (millions). Retrieved from: World Health Organisation: Progress on household drinking water, sanitation, and hygiene I 2000-2017, Page 17.

Lack of toilet facilities and water sanitation is a prominent threat to the life of both unborn children and their mothers. As high as one in every fifteen Nigerian children dies before reaching his/her first birth, and one in every eight does not survive to celebrate his/her fifth birthday. Inadequate sanitation systems in Nigeria have stunted the proper development of 12 million children and caused acute malnutrition of further two million children. Lack of proper water sanitation and toilet facilities also affects attendance at school, especially amongst girls. 1 out of 10 girls in Africa miss school during their menstruation and eventually drop out8. So, if these children were to survive to adulthood, their capacity to positively contribute to their economy is limited, pushing them further in poverty cycles. Furthermore, this impact is a direct result of inadequate toilet facilities, which hinders their educational development.

What is the global standard for washrooms per capita in school? The UN suggests that as a standard, one toilet should be available per 20 students. According to 2018 statistics provided by WaterAid, over 620 million school children worldwide do not have access to proper functioning school toilets, therefore, falling short of the basic requirements that are set out by the UN. As a result, children are forced to defecate in the open. The data depicted is taken from 101 countries, elucidates that one-third of the world’s schools lack proper access to toilets, endangering the health of their staff and children. Moreover, even more, alarming statistics have been provided by the World Health Organization (WHO), which depicted that 2.3 billion people globally do not have access to basic sanitation afforded by modern plumbing.

Even though only 13 out of 774 local government areas in Nigeria have been certified as free from open defecation, this shows some progress has been achieved in parts of Nigeria. According to the government, a four-year evaluation scheme in 247 communities in Enugu and Ekiti states, directed by “WaterAid,” found that community- led sanitation programs had increased toilet ownership by 10%, while simultaneously decreasing open defecation by 9-10%. However, in order to fully solve the problem, a further 14 million toilets need to be built in Nigeria, if the country wishes to reach its Universal Basic Sanitation goal by 2025.

The pressing circumstances of this problem, the immediate goals, and the continuous detriment to health should be enough to initiate support from other organizations and charities. Small projects have the power to make significant changes in the lives of people in Africa.

After finding out that shockingly, half of the schools in Nigeria lack necessary toilet facilities according to WaterAid  9 The Centre for African Justice, Peace and Human Rights (CAJPHR), based in The Hague– through its research, implemented a project in Nigeria. Our Right to Quality Education team managed to map the most impoverished schools in Nigeria in order to provide the much-needed sustainable aid. Even though %50 of all schools in Nigeria do not have essential water supply and sanitation,according to Evelyn Mere–Nigeria’s WaterAid country director–finding the most dreadful schools in the country was not an easy task. Through our research and partners, CAJPHR successfully located the direst schools and implemented its first-ever developmental project in Enugu. This project provided access to clean water and toilet facilities to 700 students and 25 teachers/staff members at a public school called “Independence Layout Primary School 2” in Enugu, Enugu State, Nigeria. CAJPHR managed to equip the school with the needed washroom and toilet facilities. In this effort, the project has successfully renovated four toilet units, constructed two new toilets, built an overhead tank stand with two GEE PEE tanks of water reservoir mounted, constructed water well and provided the school with an electric water pumping machine.

Our sustainable project impacted the health, economy, and the education of the community in Enugu. Our project has dramatically reduced health issues caused by a lack of access to proper sanitation and clean water, such as diarrhea, cholera, typhoid fever, and dysentery by %80 among children. It has increased school attendance by over %98 (which effected mostly girls missing classes during their menstrual cycles), reduced health care costs in the community, and created temporary jobs by employing local construction companies. The project has also made the students less vulnerable to external threats such as road accidents, kidnapping by criminal organizations, and being bitten by insects/animals in the bushes. An unfortunate tragic fatal accident precisely one week before the implementation of our project, altered our project cycle implementation date. A student was hit by a truck for moving outside school premises to find a safe place to defecate.

So, one might ask how did we ensure the sustainability of the project? Through the sale of the excess water gathered in the well. The staff and parents at the school donate their time to sell the extra water at the local markets on the weekends, generating the extra income needed for the proper maintenance and the upgrade of the facilities built. Thus, we can proudly say that this project has positively contributed to higher sanitation and the economic growth and development of the community as a whole by providing much-needed water to the broader community.

Lastly, what does the future look like for water sanitation in Nigeria? The Nigerian government has been somewhat successful in curbing unsanitary practices through its–European-Union-Funded–initiatives such as the 2019 “Clean Nigeria: Use the Toilet,” as part of its “National Action Plan” 10.

There is no doubt that when we analyze the issue of open defecation and lack of sanitized water facilities in schools, we come to realize that more needs to be done by most governments in African. There is no Panacea in dealing with this phenomenon in parts of the developing world. However, what we found as an organization is that the practice of open defecation– especially in schools– is not only caused as a result of limited access to adequate infrastructure but also due to lack of education. A large portion of the population is not informed of the negative health consequences that outdoors defecation can have, risking their lives as a result. Numerous research has been conducted, which highlights that often, even after the infrastructure was built in a given community, people in the community still preferred defecating outdoors due to their lifelong habit11. Efforts, therefore, are also necessary to include education around why defecating outside is a health hazard, as well as financing and facilitating toilet building structures.

Habits are there to be broken, African countries such as Nigeria and Ethiopia (worst on the list for lack of toilet facilities at schools in Africa) can learn from South East Asian countries such as India and Bangladesh. Between 2014 and 2018, India has removed about 500 million people from open defecation and is ambitiously aiming to eliminate this practice by the end of 201912. Bangladesh, through its various campaigns and policies, has managed to reduced once widely practice open defecation to less than one percent. Therefore, the fact that particular practice has become a part of society does not determine its permanence.

To tackle this issue holistically, all levels of society need to get involved. Governments, international development agencies, civil societies, communities, NGOs, and private sectors all have a role to play. They need to work closely with one another in upgrading infrastructure and educating communities on the impact of access to sanitized washroom facilities on the health of their communities. In this effort, the private sector has the most crucial role to play through innovative ideas and technologies it presents. For instance, many companies shared their innovative toilets at the “Reinvented Toilet Expo” in Beijing in 2018. They introduced toilets such as “Nano Membrane Toilets” that does not require connection to water or sewage lines, making it more accessible anywhere, especially communities with no plumbing infrastructure in place. Some of these toilets went so far as to transforming human stool to fertilizers and urine to water for crops and bathing livestock, therefore, transforming feces to a utility. 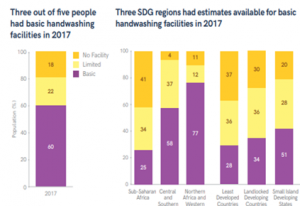 On a final note, we must remember that we all have a responsibility towards our society and especially the most vulnerable segments, our children. We are responsible for their health and their physical and mental growth. Furthermore, we cannot fulfill this responsibility without providing their most basic human needs, such as access to essential water and sanitation facilities at school, which is essential in ensuring a safe, healthy, and inclusive environment for growth. With this global perspective in mind, open defecation, and the health problems it causes can become a thing of the past.