Sexual Violence Against The Male Gender : The case of child soldier 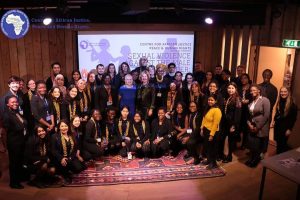 The Hague – The Centre for African Justice, Peace & Human Rights held its 3rd Annual  Conference on “Sexual Violence against the Male Gender : The case of Child Soldiers” on 11th  February, 2020. The event, which focused on child soldiers as both victims and perpitrators of sexual violence, was held at Humanity House. Four speakers with backgrounds in International Criminal Law (ICL) addressed attendees in two sessions. The Centre also used this occasion to launch its database on sexual violence against the male gender.

The first session, which was themed ‘Experiences from the Dominic Ongwen Case’, was moderated by Her Excellency Ms. Miriam Blaak Sow, Ambassador Plenipotentiary to the Kingdom of the Netherlands from Uganda. The two speakers in the session were Mr. Benjamin Gumpert and Ms. Beth Lyons. Mr. Gumpert, Senior Trial Lawyer at the Office of the Prosecutor at the International Criminal Court, delivered a presentation titled ‘Prosecuting Cases involving Child Soldiers: Issues of Sexual Violence by and against them’. Ms. Lyons, Defence Counsel representing Dominic Ongwen at the trial, made a presentation on the subject ‘Forced Abduction and Recruitment as Child Soldiers: A mitigating factor for deciding Crime and Punishment’.

The speakers in the second session were Mr. Dmytro Suprun and Dr. Jens Iverson. Mr Suprun, Counsel at the Office of Public Counsel for victims at the International Criminal Court (ICC),  delivered a presentation titled, ‘The Legal Status of Child Soldiers: The Duality of Victim & Perpetrator’. Dr. Iverson, Assistant Professor at the Grotius Centre for International Legal Studies, delivered a presentation titled ‘Potential Impunity Gaps for Atrocities committed against one’s own armed forces between Crimes Against Humanity and War Crimes’.

The question and answer sessions at the end of each session provided an opportunity to the audience to interact with the speakers and raise important queries. The audience consisted of university professors, students, PhD scholars, interns, representatives of Non-Governmental Organizations (NGOs), investigators from the ICC and members of civil society. The speakers’ responses increased understanding of the subject and provided deep insight into the issue.

The Centre’s database on sexual violence against the male gender was also launched at this event. The database represents a year’s work by the Sexual Violence Team which is led by Dr. Sumaiya Musharraf. Dr. Musharraf and the Centre’s Chairperson Barrister Sophia Ugwu both delivered remarks to launch the database which can be found at: http://centreforafricanjusticesvmg.org