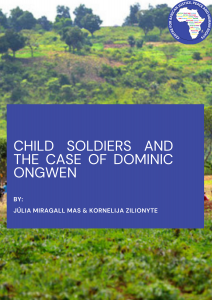 Many children are used as a weapon in various armed conflicts. These children are recruited, trained, often forced and tortured, or even hired voluntarily when feeling that there is no other option to survive. Many boys and girls have been deprived of their rights to education, the opportunity to choose and simply enjoy their childhood as a consequence, being forced to engage in conflict and atrocities. Such use of children in the conflict zones has become a common practice for its flexibility and tactical advantage.

The case of Ongwen marks the important precedent of such circumstances, which also brought important questions to the international scene. One of the aspects was based on the culpability of the perpetrator, who also experienced such abuses during childhood. The defendant Mr Ongwen was one of the main commanders, and by himself, he was abducted in 1987, when he was nine. He was also trained by the commanders of the Lord’s Resistance Army and experienced abuse during that time. He spent his life as a part of the LRA ranks and took a position of command later on. In such a scenario, the culpability criteria require further assessment: once one becomes a child soldier, are they always a child soldier?

The judgement of the International Criminal Court (ICC) addresses this important question. The judgement of the Court appears as a precedent, which contemplates whether the heavy abuse during childhood has a causal link to the crimes committed further in adulthood.

This article will introduce the reader to the context of Ongwen’s case and its judgement. Afterwards, it will examine relevant provisions of the ICC statute and its relation to the use of child soldiers. Furthermore, the article will provide an analysis of the legal assessment of the vulnerability aspect, and it  will interlink the legal obstacles thereof. Finally, the research will explain the results of the Ongwen judgement and the effect of it which changed the legal scene from now on.

Child Soldiers and the Ongwen Judgment

The practices of the LRA included abducting, recruiting and enlisting children to their ranks. Furthermore, child soldiers were trained to conduct military duties, forced to carry out punishments of anyone trespassing LRA rules, and made to take part in the destruction including by killing, burning homes, looting, torture and beatings. Therefore, child soldiers often were converted into perpetrators through committing atrocities, be it willingly or unwillingly, from which they suffered significant trauma. Furthermore, the LRA made use of Acholi spiritualism, thereby ensuring fear and obedience to Joseph Kony and the LRA’s regulations, with the threat of death or punishment.

According to Article 8(b)(xxvi) of the Rome Statute, the conscription and enlistment of children is prohibited as a serious violation of the laws applicable to armed conflicts constituting a war crime. For this purpose, children include all persons under the age of fifteen years old.  As stated in Ntaganda, the consent of a child to be conscripted or enlisted in armed forces is irrelevant, as it is often the case that children do so to escape. Moreover, enlistment and conscription are enough to constitute criminal behaviour, thereby not requiring that the child soldiers be actively participating in hostilities.

Therefore, such practices by the LRA constitute war crimes as prohibited under Article 8 of the Rome Statute.

Dominic Ongwen was abducted when he was around 9 years old as he was walking to school, as stated in paragraph 29 of the Ongwen Judgment, and was immediately conscripted in the LRA. According to the ICC Prosecutor’s statement in 2016, Mr. Ongwen claimed to have been the victim of crimes he later committed.

According to Dr. Abbo’s testimony called on by the Prosecution, a Ugandan professor and psychiatrist, children abducted by the LRA did not have any alternative. Conscripted children were forced to commit atrocities and undergo initiation rituals for the purpose of “cleansing”, as well as conducting the severe punishment of unsuccessful escapees.

According to Article 26, the Court does not have jurisdiction to try persons under the age of 18, for which the crimes committed by Mr. Ongwen before he reached that age cannot be tried. However, a child soldier like Dominic Ongwen loses their status of victim as they reach the age of 15.

The Judgment evoked questions on the culpability of former child soldiers, especially with regards to the duality of victim and perpetrator status. Moreover, as stated by former ICC Prosecutor Fatou Bensouda in 2016, the perpetrator-victim phenomenon is not rare, as child abusers have often been subjected to abuse as children.

This issue was addressed in the Judgment, thereby raising concerns regarding the lack of existence of a dual status of victim and perpetrator. Furthermore, this issue bore significance to the question of whether Mr. Ongwen should bear full responsibility for his actions as an adult or whether his past as a child soldier was to serve as a mitigating factor.

The Judgment stated that Mr. Ongwen had been abducted by the LRA as a child and remained part of the group when he was between 24 and 27 years old, being the age relevant for the charges. Therefore, he endured great suffering in his childhood and youth since the time of his abduction by the LRA, thereby showing that child soldiers (although initially viewed as victims) can and are often converted into perpetrators by willingly or unwillingly committing atrocities. Furthermore, the Defence argued that Mr. Ongwen acted under duress, and that his status as a victim had not ended after attaining the limiting age of 18.

However, the Chamber found that the accused’s childhood experience was not central to the issue addressed. Instead, it concluded that Dominic Ongwen committed the crimes as a fully responsible adult and as an LRA commander.

Vulnerability of Child Soldiers and its Impact

Vulnerability plays an important aspect in the assessment of mens rea or culpa of the offence. In itself, this notion can impose some effect on the offender’s profile, for instance, while looking from the perspective of decreasing the level of responsibility, based on certain individual characteristics or situational circumstances. That can also be looked at as the partially excusing factor, from the perspective of having a limited defence. In general, vulnerability taken from the offender’s profile is often recognised as duress or other external or internal circumstances affecting the human’s cognitive behaviour. While the personal circumstances include more fundamental grounds imposing certain behaviour, the situational reasons can affect an individual due to physical or other abuse, or other circumstances, which is immediately enacted and cannot be seen as rooted in human development. In a social context, this shows to be the root of social vulnerability in often neglected circumstances, which exposes an individual to a risk of victimisation. While following this logic, when applied to the offender’s profile, such circumstances can at least partially explain the reasoning behind the crime.

In the context of international crimes, it is also codified in Article 31 of the Rome Statute, which lists the grounds of excluding criminal responsibility. That also leads to different excluding factors, such as mental diseases or defects, intoxication which causes the incapacity to act, or the person seeks to defend himself from imminent and unlawful use of force, or other circumstances which are conducted by others or beyond the person’s control. Further, the perpetrator can also rely on Article 33 which acknowledges the structured orders of superiors and a certain level of obligation to obey them. According to the practice of ICC, victims are often marked as the symbol of the idea of the Court, as it refers to the willingness to restore the concept of justice and substitute the situation of the victim. The current patterns of the Court’s approach is in line with the notion of idea-victim, which are referred to the certain personal or situational circumstances which fulfill the idea of requiring restoration of justice to such individuals. It is also of utmost importance that the perception of the real victim is often referred towards the children and women, who are considered as protected groups and therefore automatically subjected to the vulnerability.

In the assessment of vulnerability regarding the ideal victim, for the Court, the child’s innocence is absolute, which is also defined by imposing jurisdiction which arises from the perpetrators of 18 years old. The difference occurs in child soldiers cases, as it was also reaffirmed by the recent judgement of Ongwen when the legal mechanisms purposively minimize the importance of the child’s characteristics in the concept of child soldiers. In this instance, ICC emphasized a victim-centred approach, which diminished the vulnerability aspect arising from the offender’s profile.

Evidently, the lines between perpetrator and the victim are more blurred nowadays, following the example of child soldiers. The recruiting of such a force is often under physical or psychological abuse, which could certainly influence the development of the individual. In the specific case of Dominic Ongwen, the commander was abducted by the above-mentioned LRA forces and later perpetrated similar crimes himself, as it was addressed as the primary point of his defence. The reasoning imposed a dangerous shift from innocent child to the child soldier, since the experiences of the latter which may expose the perpetrator to a certain level of vulnerability do not diminish the mens rea of the crime.

Consequently, a victim-centred approach can influence the evidentiary scene of the crime, especially from the perpetrator’s profile. While the prosecutor introduced Dominic Ongwen as a manifested murderer, a different narrative appeared in the defence, which demonstrated the brutality of the setting in which Ongwen was raised. That explains that a firm hesitation of overlooking the social context of the perpetrator deprives the perpetrator’s profile of victimisation in itself. From the theoretical side of view, setting the ‘ideal-victim’ standard as above might prevent the justice to serve the victims primarily, despite the context they emerge from.

The Judgment addresses important questions, including the ‘victim-perpetrator’ status. The Court follows a victim-centred approach in their assessment of ‘vulnerability’, which regards victims as those in personal or situational circumstances which necessitate the restoration of justice.

As in the case of Mr. Ongwen, conscripted children are forced to commit atrocities and engage in conflict by groups such as the LRA. Furthermore, they are forced to undergo or subjected to ‘cleansing’ rituals of a similar nature, which involves great suffering with the objective of turning them into ‘weapons of war’.

Groups such as children (under 18 years old) automatically fall under the ‘vulnerability’ of victims as per the Court’s approach, and are consequently protected by their victim status. However, this approach results in an assessment according to which once the child soldier turns 18, they are no longer protected by such status, as they become only a perpetrator. Therefore, the victim-centred approach brings risks to diminish the implications of being a child soldier and their effects once becoming an adult.